Ted Davies woodcut prints are now available at Romany Kramoris Gallery. Charming and evocative, these prints recall a New York of an earlier era, an age before cell phones and iPods, a time of Chinese laundries, in-town gas stations, the El. Davies has the eye of an artistically inclined flaneur, noticing as he saunters around the city the 2nd hand book store tucked under the hair stylist’s shop, the faces and postures and preoccupations of the lunchtime crowd loafing on the steps, the weary face of the token lady at the uptown El entrance. Ted’s wood-cut line is loose and limber; his colors warm ochres, yellows and browns, set off by black and the occasional flash of red. His vision of the city is intimate and amused, catching the quirky details and human touches, the city’s hard edges softened into tilts, curves and loops.

Davies has a particular feel for splintery wooden floors and shelves sagging under teetering boxes as in his print of a Chinese laundry. His evocation of a city gas station is pure urban poetry with two winged “A’s” framing a man in an Hawaiian shirt, seen lugging a heavy gallon gas canister to his most likely stalled vehicle, under the approving gaze of the gas station owner garbed in a stained and wrinkled T-shirt, baggy green work pants, feet encircled by a looping gas pump line. A cozy, inviting place to go is Davies’ O’Rourke’s bar, beautifully rendered in warm yellows, ochres and browns, in its swooping corner location, doors half-open glimpsing for the viewer its interior, welcoming you in.

Davies’ wonderful feel for textures continues in the worn pinkish brick and sodden sidewalks of “Merritt’s Food” and the rags, polish, and cans of the ramshackle shop of the Shoe Shine man. Variations on the theme of a Central Park bench bring forth different moods. Seen from the back, the benches’ wooden slats create a rhythm of undulating lines and dictate the horizontal format of the print. On the print’s far right, balancing the horizontality, cluster a lamppost and the tall buildings that rim the park. One version of “Park Bench” is printed in dark red ink on white paper; with no people on the bench, the emptiness creates a lonesome feel. The second print bursts with color, calling forth spring or early summer. Davies has carved several more blocks adding masses of green trees, a man with a bright red brief case, a blue sky reflected in the blue reservoir, and the tall, white city buildings shining bright against the blueness. Most importantly, the benches are now crowded with people and conviviality. In this pre-cell phone era, people reach towards one another in conversation, interact, enjoy each other, their bodies not hunched over, eyes locked into tiny screens.

Dan Welden, an old friend of Davies, described him as a “private man, a craftsman, a thinker” and an artist who “did not toot his horn.” For Welden, a master printer, woodblock printing is “the honest medium”. Everything is visible: the grain of the wood, every mark and line. It is an unforgiving medium, demanding truthfulness. When you make a mistake, you see it. You cannot fudge a line. This honesty is accompanied by intimacy, the intimacy of touch, as every print is carefully hand-rubbed. Because Davies’ prints are often two or three colors, this involves more careful labor, more intimacy with the paper and ink. Welden says that Ted made limited numbers of each print; his interest lay in creating the images not in publishing editions. Davies’ honesty and intimacy are apparent in both his technical ability and in his choice of subject matter.

Ted Davies’ woodcuts “Cards of Life, Cards of Death” also on view represent modern society in American and world-wide of the 60’s. Social and political criticism and satire are aimed at “Government,” “The Corporations” (Queen of Diamonds), “War,” more favorably “The Imagination,” “The Family” but finally, triumphantly “Death.”

Davies was born in Queens and for many years had large studio on 14th Street from which he could roam the city streets drawing inspiration for his work. He also lovingly restored and maintained a home in Sag Harbor. Another friend of Ted’s, Sag Harbor photographer Linda K. Alpern, commented on his generosity as a teacher and artist as he opened his dark room to her and taught her new technical skills. This generosity of spirit sings in Davies’ charming evocations of an older New York City, carved in the most humane and endearing of mediums, the wood-block print. Do not miss the opportunity to see this wonderful work. 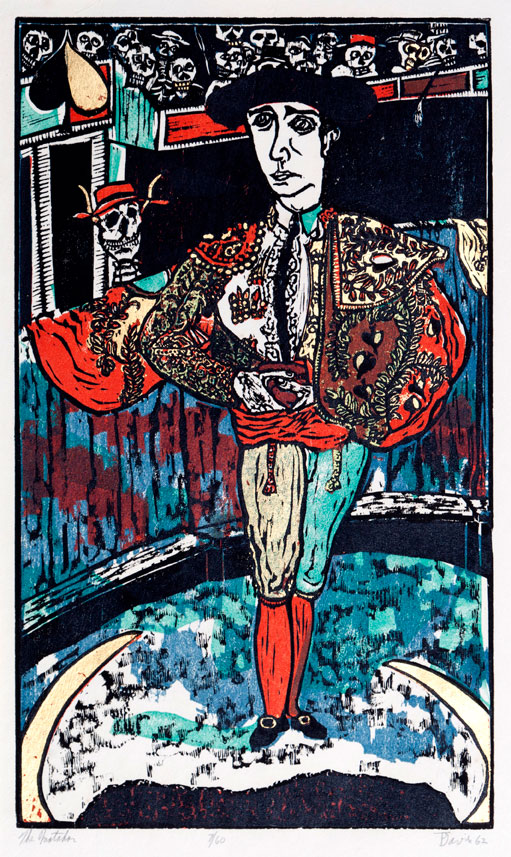 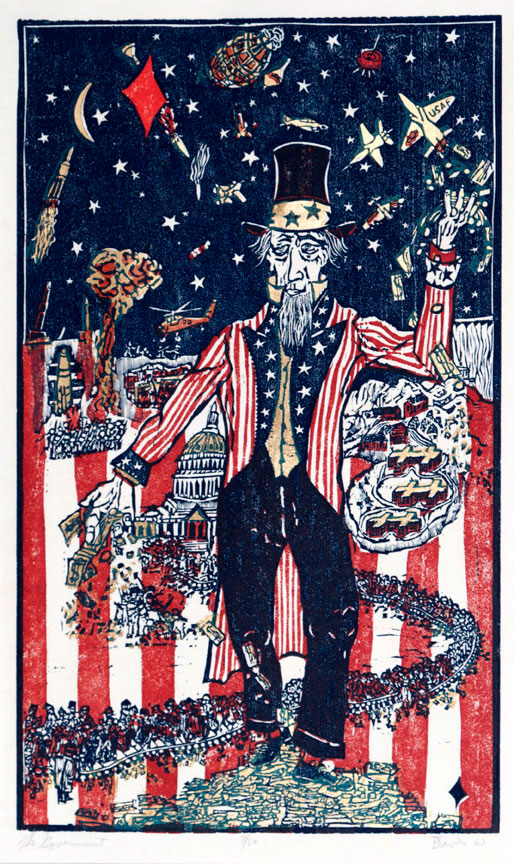 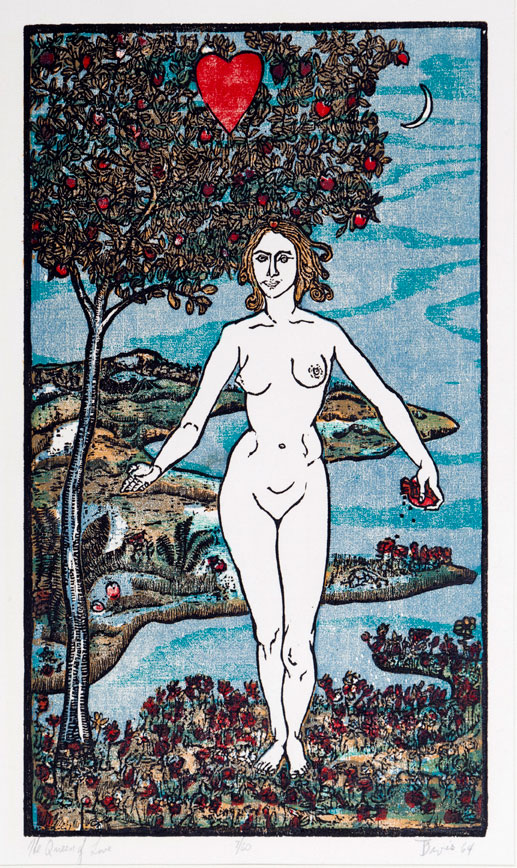 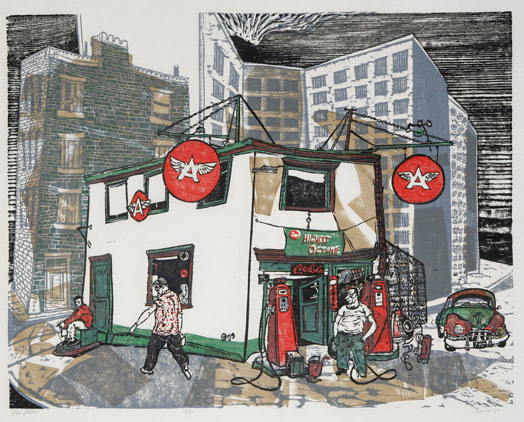 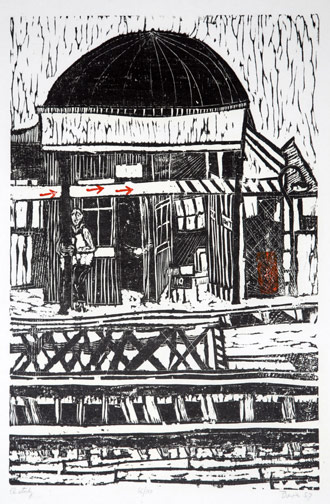 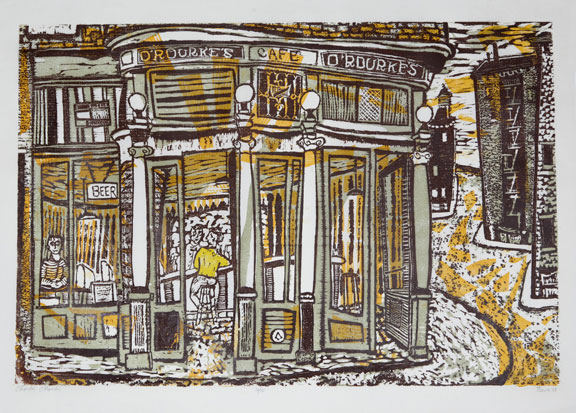